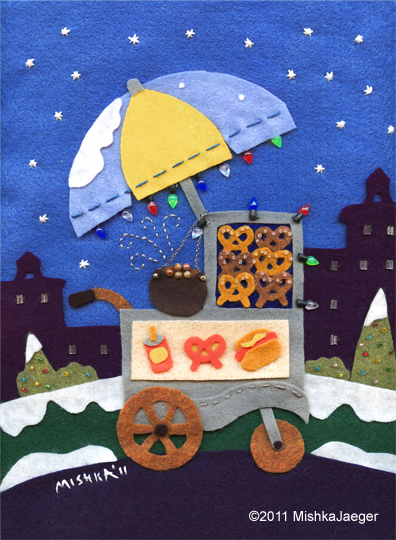 Happy Holidays! As usual, I’m late for lofting this card to GCU in any decent amount of time this year but the link will be posted here as soon as it’s approved.

(Edit: wow that was approved in record time. Here’s the link.)

I had this idea last year as we were driving home from a weekend trip to NYC to see all the Christmas windows, the Rockettes, and, of course, some old friends. Bill and I were talking about the smell of the chestnut carts being one of the more defining elements of New York at Christmas. Unfortunately, it’s getting increasingly harder and harder to find chestnut vendors except in the tourist areas. And after doing a bit of research, we discovered that there was a pretty bad chestnut blight all across America in the early 20th century so now almost all of our chestnuts are imported.

For my holiday card this year, I wanted to create the iconic Sabrett vending cart. And for some reason, I wanted to do it in felt. I used to work with a lot of other media when I was younger and I was feeling nostalgic. I definitely wanted to get off the computer and get my hands dirty again. So I dug through all my art supplies and came up with all the ingredients for this piece. The only new thing I bought were the little Christmas lights which came from the sticker department at Michaels. I cut off the ones I wanted and used their own string to sew them on. I’m almost ashamed to say that some of the felt I used is almost 25 years old!

I scanned the piece directly and then messed with the colors, brightness and contrast in Photoshop. I admit I did a fairly quick job of it. Neither my laptop monitor nor my failing old tube monitor reflect print color accurately (I really need a new monitor), so I’m left guessing by number at the actual print color and saturation. Hmm, maybe I should ask Santa…

Have a happy holiday season, everyone!