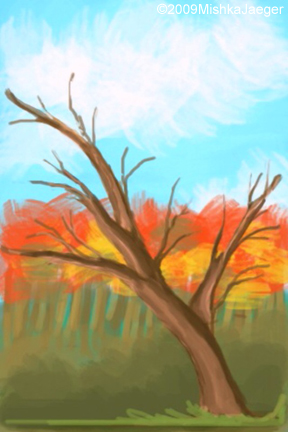 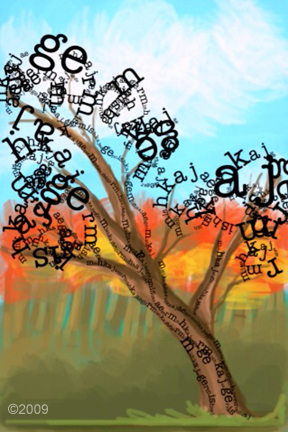 autumn tree (trying out autodesk sketchbook on the iphone) 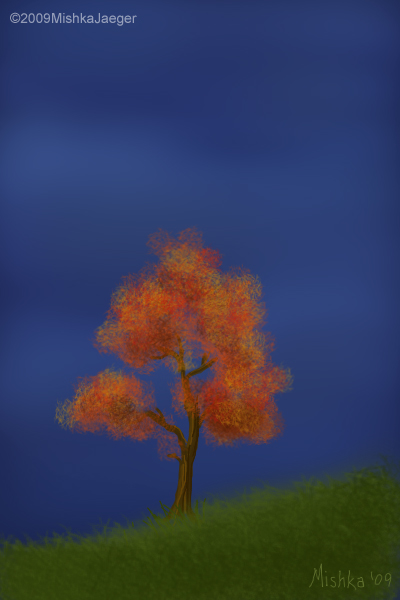 I’ve only used the full-blown ap one time on a friend’s computer. I’m more familiar with Artrage. But the iphone ap is definitely in the same category of low-rent painting programs. It absolutely does what I want it to do. The only limitations I’ve hit so far: not pressure sensitive (though I think they’re using speed to simulate that) and you can’t see through your finger to do any fine “brushwork.” I’m probably going to buy an iPhone “stylus” and see how well that works.
The first time I used it, the ap crashed after an hour (gee I knew I shoulda saved!). It’s supposed to have 6-layer capacity but I get only 3 on my device. There are some predictable size limits. Default resolution is 5×8@72dpi/1.333×2@300dpi or 400x 600 so kind of low. The above image is actual size (I hesitate to call that high-res) though the ap says it does 1024 x 682 on 3GS iPhones (mine is not).
Layers copied over fine. Added sig and &copy notice plus did the jpg export in PSD (the ap exports PSD layers or PNG format). The interface is just as easy to use as the larger computer programs. I think I got more than my $3 worth with this little one.