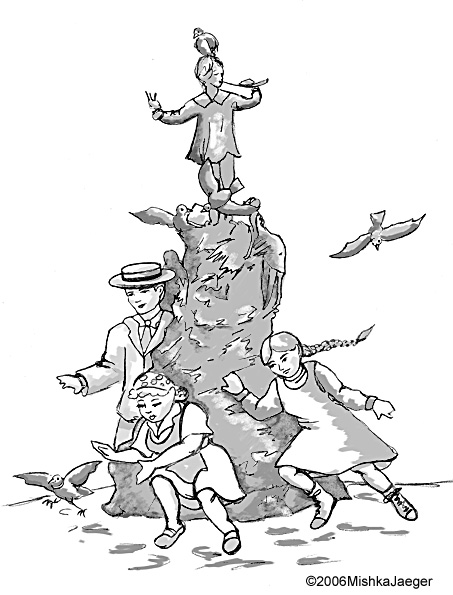 I posted a comment in a friends LJ blog last week that included part of this story. Then I obsessed and over the weekend, I dug up my journal entry about it. Very conveniently, Illustration Friday’s topic for this week allowed me to follow through and illustrate the story. I tried a few new techniques. Not my best work, but at least it’s out of my head!

Monday September 14th, 1992 was a beautiful sunny day. I tried out my internship at the Gate theatre and disliked it. I ended up wasting everyone’s time by doing nothing but snivel.

Being somewhat directionless and angry with myself, I decided to walk over to Hyde Park and have a talk with Peter Pan over lunch. I’d brought a peanut butter and jelly sandwich and a small package of crisps. I sat at the foot of the statue and proceeded to be dive-bombed by the pigeons who ripped the entire sandwich out of my hands and ate it before I could even get it to my mouth.

Then I noticed there was a pigeon with a white plastic milk-bottle ring stuck around it’s neck. For some unknown reason, perhaps it was because I had nothing better to do (I certainly wasn’t feeling all that benevolent to pigeons in general), I decided to rescue it. I ended up chasing the damn thing in circles around the statue for half an hour. An older man with white hair and a straw hat was walking by and, amusingly, decided to try to help me catch the pigeon. After we chased the thing a few more laps, we were joined by a middle aged woman in a house-smock with accidental pink hair, and painted lower lashes. Imagine the three of us chasing this stupid pigeon for a few more laps.

And then we finally got it. Rebecca caught the pigeon, and I cut the plastic ring off with Mr. Lowell’s pocket knife. With all the excitement over, Rebecca vanished to continue her errands, and Mr. Lowell asked me if I would join him for lunch in the park. There is a café near the Serpentine. It was practically empty and somewhat off-season (it being a rather steely gray September day in London) but we ate outside and waved away the autumn bees.

It turned out that Mr. Lowell was Ross Lowell, an academy award winning cinematographer and founder of Lowell Lighting in New York. I decided that if I could meet cinematographers while chasing pigeons, I didn’t need the internship.