I’ve been thinking about getting a tattoo in a henna color of a sea turtle. Not sure why it took me so long to realize that the sea turtle is mine but there it is. Actually, I finally realized it when I saw a mosaic of a turtle made of stones in the concrete sidewalk last spring in the little Mexican village of Puerto Morelos (but then I got pregnant so I have to wait a little bit). I also have a batik tapestry covered in the turtles that I bought in Saint Martin 8 years ago which had been all but forgotten, stuck in the closet all this time waiting to be displayed in my someday art studio.

Thinking back on it, I also remember a woman named Janet whom I knew some 20 years ago. She was going on about the turtle club or somesuch nonesense which led to a definition of turtles and snails. Back when I was just about 20 and everyone I knew was backpacking somewhere or on a walkabout, we made the distinction that snails always carried their homes with them but turtles always have a nest to return home to so they just bivouac in their shells. I hope not to be corrected too severely on this colorful anthropomorphic point by my scientist friends.

I do have a few other personal reasons for picking this design that have surfaced in my life in strange little places (like the day I was at the San diego zoo and every singe turtle from the teeny weeny to the Galapagos tortoise were breeding) but which I will mostly keep to myself.

Lastly, there is all the ancient symbolism in so many cultures about the turtle. And here we are on Turtle Island. A simple Google search will provide more information that you really want to know about this. But the majority of these traditions hold the turtle or sea turtle as a symbol of life, the cycle of life, strength and pillars of support, renewal. Here are some quotes I’ve taken from various websites with meanings I appreciate (and yes I realize I am making no distinction between land and sea turtles. This all just made for some fun reading).:

“One of four Chinese sacred animals, the mythical Turtle is a creature of two elements; land and sea, as such the Turtle reflects an ability to adapt and flourish in any environment.”

“In American Indian culture, the Turtle represents the wisdom of the ancient ones and is respected for it’s strength and individuality. Those who bear the symbol of the Turtle carry the responsibility of caring for, protecting, and nurturing others.”

“In the Hindu religion the Turtle is considered to be the second incarnation of the powerful god Vishnu…
Turtles are also symbols of immortality and are considered temporary dwelling places for souls making their way through a series of lives on the path to Nirvana.”

“The Turtle. A water animal. Strength, feminine “power fetish” animal, fertility, long life & perseverance. Considered by many to be able to defy death, also an annoyance to the Coyote. (Southwestern Native American)”

And this from a website about turtles (turtletanks dot org):

The Native American turtle has a lot of meanings. The turtle, a water animal, is a symbol for strength, fertility and perseverance. It was considered a power fetish animal. It was believed to have the ability to defy death.

The turtle was part of communication between tribes. The Great Plains people regarded the turtle as a symbol of a meaningful and long life. Not all tribes used the same symbols, but they often communicated using languages to portray a central idea.

The back of the Turtle consisted of the 13 moons, which portrayed the truth of a single cycle of the Earth’s revolution around the sun. There are also 28 marks on the back, portraying the woman’s body and cycle of the moon. The shell itself portrays the actual happenings of the body and is also there to remind people of the Creator’s plan and teachings.

Torah says you may not make marks on your body to commemorate the dead. So I won’t do that. I will instead chose a symbol for my new life.Here are some of my early ideas for my singing turtle. 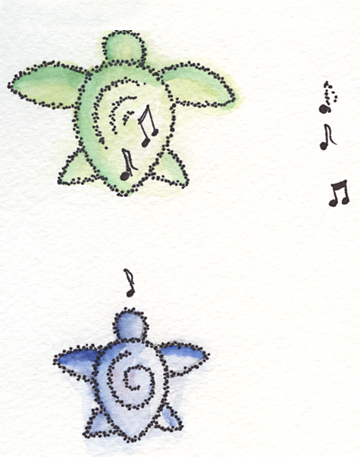