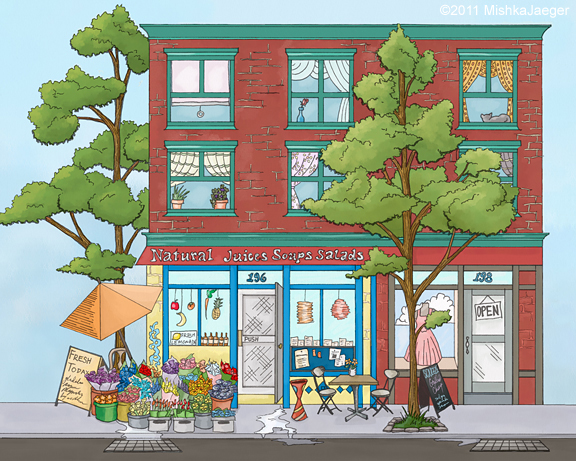 Back in the late 90’s to early aughts my brother, Harris, lived on Bedford Avenue in Brooklyn across the street and a few blocks up from this wonderful juice shop where he took me for my first freshly juiced orange-carrot. I just couldn’t do the green stuff. We joked it was a lot like Annie Hall. Anyway, I made this illustration for him about 10 years ago or so. Custom giclee wasn’t that common and it was very expensive, so I printed the illustration myself onto four iron-on papers. I then painstakingly lined them up, ironed them onto a canvas, stretched the canvas, framed it in black electrical tape, and then presented it to Harris as a gift. Yup, classy. He loved it.

The juice shop and dress shop next door are no longer there. The street shot from Google shows that corner now to be so boring I won’t even bother posting a photo of what’s there. No flower stall, no vibrant yellow and blue walls. Oh well. Time passes, things change. Perhaps that is why art is (or should be) important.

Last spring, Cafepress offered a 16″ x 20″ canvas print including shipping on Groupon for $40 so I figured I’d try it out with this image. I pulled out the old image and discovered that not only could I not find a copy at a resolution higher than would print at 8 x 10, I HATED the techniques I used to digipaint it. This was back in my forced-patterns phase. That is to say, someone gave me a critique that I didn’t use enough pattern and texture in my work and I took them literally. Ouch. What they REALLY meant, I realized years later, was that my digital work was not friendly and organic-looking enough. Anyway, with the Groupon about to expire and REALLY limited time, I channeled my best Andy Worhol (that is to say my digital work will probably never be finished if I keep looking at it). I managed to locate the original drawing (inked as if it was meant for a comic book!), re-scanned it, blew up the low-res, aligned the paint layer as best as possible, used all the base colors, and repainted the image in roughly 5 hours.

As far as I’m concerned, it’s still not the greatest but it’s A LOT better than it was. I just uploaded it to Cafepress. Let’s see how it turns out.