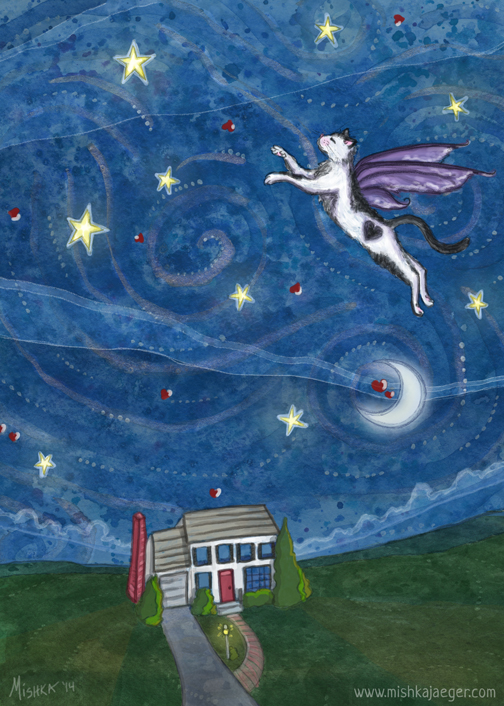 A little “Starry Night” and a little Chagall, a tribute to Char-Cat, who flew away.

On August 21st we said goodbye to our cat of 10 years, Charlemagne. He was a great cat. He loved people. As I’ve said previously, he did indeed have a black heart on his side. It became two hearts when he sat down. He rolled in dirt like a dog, shaked hands for treats, and bossed me around because I was the female. But he had the world’s loudest purr and was just the friendliest and most playful furball. He thought he was a person, I think. We are all sad that he got sick and left us a little too early.

Today, I finished this illustration. I like the image of him flying off, over the moon and back to g-d. I always imagine people and critters flying away when they die. It’s a calming and comforting image to me.

I’ll probably keep drawing white cats with black hearts on their sides, even though I deliberately never drew his spotting correctly. Here’s one of the last photos of Char. Maybe we’ll meet again someday, little cat.