Heal the World – Seeds of Peace 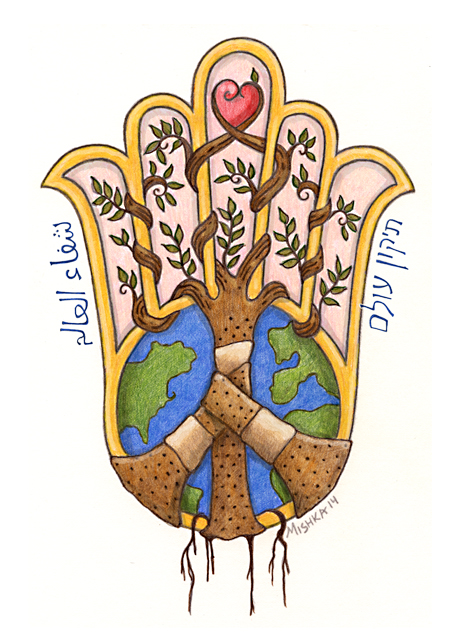 What does an artist do when she feels strongly about something she feels helpless to do anything about? She makes art.

This past summer, I discovered that facebook’s algorithms made it hard for me to share articles or comments that truly represented how I was feeling about the Gaza war. It seemed only the same 12 people were seeing the shares in my feed. My sympathy went to those on both sides of this conflict. Ultimately, I deleted my shared links and comments. I didn’t think I was being heard. And this weekend, I finally finished this piece. I hope a picture really IS worth a thousand words.

Among several groups I have been following on Facebook are Palestine Loves Israel, moderated by the wonderful Palestinian woman who goes by JouJou (I also heard her interviewed this summer), and Israel Loves Palestine, moderated by Noa.

Israeli graphic designer Ronny Edry started sharing the love with the original group, Israel Loves Iran (please watch his TED talk), which has now grown in sharing the love to become The Peace Factory. These groups are based on the notion that when people get to know and understand each other, and are no longer nameless, faceless statistics, they can find care, common ground, and peace.

Here’s the story, quoted from the Peace Factory’s website:

PEACE starts with the people, one person at a time.
Today it’s easier than ever to connect and reach out to one another. We can talk, we can meet, and we can start a new friendship without even leaving our homes just by the click of a button. One new person, One new connection. Peace is when we see and treat each other as people. All we have to do is talk.

Another group of note that made the news this summer is Jews and Arabs Refuse to be Enemies which actually began on Twitter.

I would also like to call out some other grass roots organizations dedicated to peace via friendship that could use some support (and if I can figure out a way to make some print-on-demand items available using this image, I will be donating any proceeds to these orginizations. Suggestions are welcome here!):

Some notes about my art: Hamsa means five. This stylized hand symbol can be seen throughout the middle east. It is and it is not a religious symbol, predating the Abrahamic religions whose cultures all use the symbol as a folk amulet of protection, happiness, prosperity and peace. Peace. Which makes it a fantastic shared symbol to represent peace for all. It is also known as the Hand of Fatima, Miriam, or Mary, or The Hand of All Goddesses (depending on religious pursuasion) which, to me, makes this a very powerful feminine symbol. And if you follow my work, you know I love symbols of the divine feminine. Read more on wikipedia.

And just to be ham-handed (er, pardon the non-kosher/non-halal pun), I also included the western peace symbol of the 1960’s made up of band-aids from which an olive tree is growing. The original sketch is in pencil and colored pencils with a little clean-up help from Adobe Photoshop.

The text on either side in Arabic and Hebrew reads, “Heal the World,” which is a major tennant in (predominantly western) reform Judaism. After this summer, it’s pretty obvious that the world is in serious need of some healing. It is my sincere hope that someday when the children of Israel and Palestine come together in peace, the rest of the world may follow. Special thanks to my beautiful and artistic friend, Dania, for helping me with the Arabic which I can neither read nor write.

« farewell to charlemagne» The Poag’s Revenge