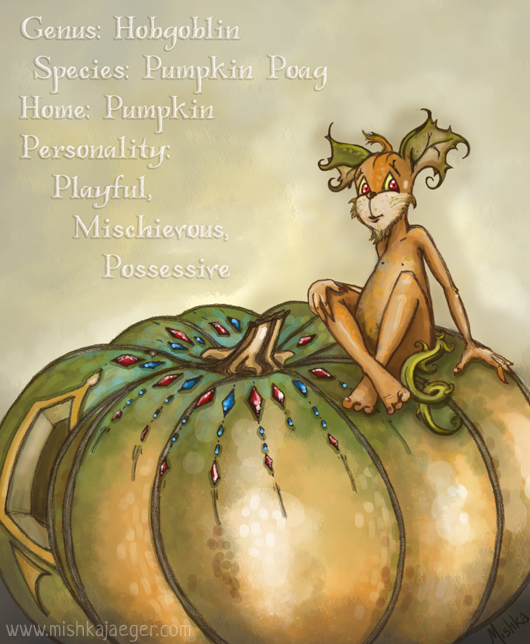 And here we go. Ladies and gentlemen, your first glimpse of the Pumpkin Poag.

This little guy made his debut in Susanna Leonard Hill’s Halloweensie Contest this past October in my weensie story, “The Poag’s Revenge.” I had just thought him up as my entry for Kidlit Creature Week (which simply had a later submission deadline) and he’d insisted I write about him.

Poags are related to Hobgoblins but generally live outdoors. They make their homes in pumpkins and gourds and might be found guarding pumpkin patches in the autumn. They prefer to live in the prettiest pumpkin in the patch. Be careful not to accidentally take that one home to carve into a jack-o-lantern.

Poags also differ a little in color and ear shape depending on where they live. For example, you might find a blue-eyed, white Poag living in a ghost pumpkin.

Poags can be playful, mischievous, and are often possessive. They enjoy crafting pleasant surprises and treats, but don’t upset them as they are very creative and often frightening tricksters.