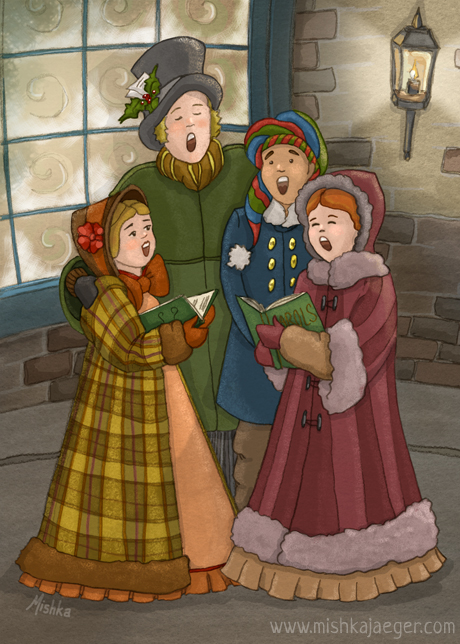 My newest Christmas card is now available for purchase on Greeting Card Universe.

Several years ago, I wanted to go Christmas caroling. Maybe this is an odd thing for a nice Jewish girl to want to do, but I was feeling festive. So I talked to my agnostic husband (whose mother had been a church choir director when he was growing up) and our wonderfully musical, atheist friend, G. They were also feeling festive and liked the idea. We only needed a lead soprano which was easy as our friend, Laura, (also an agnostic) is a professionally trained clarion. Another friend, Tara, an avid singer and an honest to goodness practicing Christian (finally!)  was all about adding mirth to the world. That first year we also convinced Ben (Jewish), a lovely bass who sang with G in the early music group The Suspicious Cheese Lords, to join us. G arranged traditional music for us to sing and off we went.

We had so much fun that we decided to do it again the following year. Alas, we lost Ben to New York City, but another Cheese Lord, Jim, stepped in to fill the void. And we added another couple – Will and Valerie to double the tennor and soprano. We were now eight. Sometimes we were also 9 or 10 depending on whether or not other friends wanted to join us. Sometimes we were only 5 if folks had other committments.

We sang at the candlelight tours at Sully Plantation and in Alexandria where we also took occasional breaks to dance at Gadsby’s Tavern, and convinced the men to sing P. D. Q. Bach’s “Good King Kong” outside the Carlyle house. We were usually tipped enough money to take ourselves out for beers afterwards. Other than that, we were mostly unpaid. Because the whole point was to spread holiday cheer, not to become a professional singing group!

We sang at nursing homes and historical society holiday parties. We sang at a lovely older woman’s birthday party at the request of her daughter. And one time we were paid a little and tipped very well to herd an entire assembly of some fourty-odd Christmas party guests from house to house in their neighborhood, leading them in song outside all their neighbors’ houses. That was tremendous fun.

But all good things must come to an end. Jim was overextended with other singing groups, Will and Valerie moved to Ithaca, Tara moved to Los Angeles and Bill and I had the Jaegerlings. So for now, we’re on hiatus. But we still have the music. Maybe in a few years, we’ll come out and carol again.

By the way, the characters I’ve drawn for this card look nothing like the members of our group.

On that note, ladies and gentlemen, here’s Joyeful Noyse: