The Challenge:  Write a children’s story (children here defined as approximately age 12 and under) in which wild weather impacts the holidays!  Your story may be poetry or prose, silly or serious or sweet, religious or not, based on Christmas, Hanukkah, Kwanzaa or whatever you celebrate, but is not to exceed 350 words.

I started this challenge two weeks late because I was so busy with November stuff (like hosting Thanksgiving) that I missed the announcement. Because of Susanna’s boisterous encouragement (no pressure!),  I promised I’d have… something. I couldn’t let her down.

So here it is with a very quickly sketched-out illustration and some backstory notes beneath. 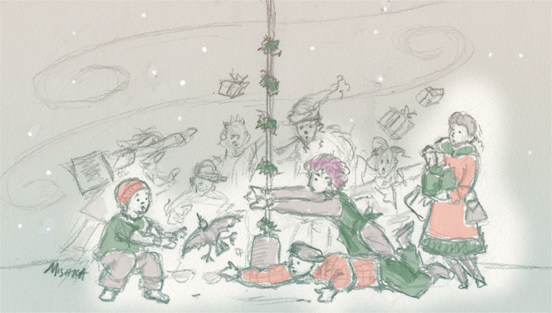 Nobody felt festive that December, not even the weather. Only days before Christmas, it was unusually warm in the city that should have already seen its first snowfall.

Danny sat on the stoop in front of his building sourly watching the crowds bustle past, narrowly but deliberately avoiding one another as they hurried through last-minute holiday errands.

A pigeon tumbled by, flapping frantically to free itself from a plastic milk-bottle ring stuck around it’s neck. Perhaps because he had nothing better to do—he certainly wasn’t feeling benevolent toward anyone let alone pigeons—Danny decided to rescue it.

The proprietor of the Christmas tree lot next door watched as Danny chased the pigeon around a lamp post for half an hour to no avail. Mr. Douglas, finally resolved to help.

After more unsuccessful laps around the lamp, Danny and Mr. Douglas were joined by a woman with accidental pink hair. Dulce was delighted to take a break from waiting on short-tempered diners.

The ridiculous ruckus inspired each passerby to set aside bags and bundles and join in the Great Pigeon Rescue, lunging, tripping, and colliding, until half of them were knocked to the sidewalk in gleeful piles of laughter.

The chaos was glorious. And, with each new laugh, the temperature dropped another degree.

Clumsily bumping a stately, loudly perfumed lady sideways, Dulce finally seized the pigeon. Danny slipped the ring off, and they let the bird go. Up it flew into the shivering clouds while the stately lady landed on Mr. Douglas in a shower of parcels.

Everyone held their breath as the stately lady’s eyes widened and her cheeks reddened.

“Are you all right?” Dulce asked.

And then it began to snow. Boisterous peals of snow.

As people helped each other up, Mrs. Latke linked elbows with Dulce and whispered into her ear.

Dulce beamed and called, “Everyone! Come into the diner for hot chocolate. Mrs. Latke’s treat!”

Mr. Douglas was first inside. Everyone enthusiastically followed.

Danny paused at the door, shaking his head at the mirthful sky, and grinned.

Fresh from PiBoIdMo, I’d already been thinking about fleshing out a story idea I’d had about Thanksgiving (and I will absolutely still write that one). But I was already in the mood to write something about being too busy or preoccpied to be thankful. And I’ve been thinking about what the “Christmas Spirit” is all about. This translated quite easily to not feeling ready for the December holidays.

The story I started to write needed more like 700 words. Or a lot of pictures. I guess so far as I can tell, I write like an illustrator. In my mind, I’d managed to concoct a full city block of an apartment building, Christmas tree stand in a vacant parking lot, a diner, a Chinese restaurant, a grocery store, and a department store. Not necessarily in that order.

My cast of characters also included Mr. Douglas’s young daughter, a Salvation Army bell ringer, a young mother pushing a stroller, and a doorman (just to name a few). And of course everyone is in a foul mood. I described scenerios in my head where people were just rotten to each other. And of course, one by one, they each join in chasing the pigeon. I’m sure Alice Schertle might be able to write all this in 350 words (I counted and there are only 363 words in Little Blue Truck!) But I couldn’t. So I limited the story to just 6 main characters including the weather and the bird. Which is still kind of a lot.

I also wanted to make the characters inaccessible (except Danny) until they started to get into the spirit which is why I described them before naming them. With the length of the story, I’m not sure that actually translated. It probably is most noticable with Mrs. Latke.

So I had a setting and characters but I kind of needed a plot that would make a good turnaround. I needed to make the weather laugh so hard that it changed and got in the mood too. I needed something ridiculous. And this very thing happened to me 22 years ago.

Yes I, myself, ridiculously chased a pigeon around the statue of Peter Pan in Hyde Park for a good long time trying to get a bottle ring off it’s neck. I was ultimately aided by an older gentleman and a woman in a house dress and what I truly still believe was accidentally pink hair. I wrote it down back then and that story also made it into this blog if you look for it.  I’d started off pretty grumpy too, so I suppose that Danny is really me.

Lastly, thanks to Johnelle DeWitt and Sara Francis-Fujimura for taking time to review for me.

Maybe I’ll leave this story as it is. Maybe I’ll flesh it out or draw it up at a later date. Who knows?