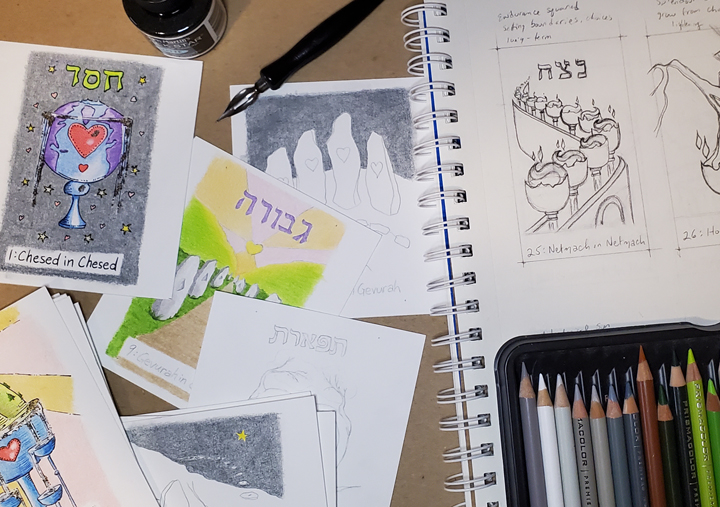 Today is the first day of #the100dayproject 2021. My plan is to use this challenge for daily accountability to work on my Omer project using the hashtag, #100DaysOfOmer. I started the Omer project last spring but my available time got crushed by everything 2020, starting with the Covid lockdown and having elementary school-aged kids who demanded more of my time. I need the accountability because I tend to put my personal projects last, and because of that I have a lot of unfinished projects. I’m going to finish this one!

What is an Omer and what is my Omer Project?

Omer was a biblical unit of measurement, sometimes translated as “sheaves.” Beginning on the second night of Passover, Jews count the 49 days (7 weeks) between Passover and Shavuot on the 50th day. This is called Sefirat HaOmer, counting the Omer.

My Omer project will be a deck of meditation cards based on the Kabalistic journey of the soul through the 7 weeks days ending on Shavuot. The approach I’m using for the art was originally inspired by Pamela Colman Smith’s work for the Arthur Waite’s Tarot deck.

Coincidentally, Sefirat HaOmer begins partway through the 100 Days project (Sunday, March 28) and ends one week after it ends (Sunday, May 16), so this was a great time for me to reboot. I’ll post more about the Omer, the Kabalistic attributes, and the journey as this project comes along.

Meanwhile, here’s a fun video from BimBam with more information about Sefirat HaOmer:

Here it is October. I’ve been away from my blog for so long that Wordpress has updated and is now FORCING me to use blocks. Which means it took me about five minutes to figure out that I needed to add a text block to the layout to be able to begin typing. Ahhh technology. It makes your life easier, right?

So lots of life things broke loose just after New Years that caused me to take a bit of a creative hiatus. Everything’s fine in my personal world, I just had to prioritize other people, house tidying and fixing, and higher paying jobs for a bit. Personal work always suffers when that happens. So I didn’t get a whole lot of that done this year. Some. Not a lot.

Anyway, as soon as the Narrative Award was announced this year, I immediately had an idea but then put it off (see priorities above) until literally the 11th hour when I swept the clutter from my art table and threw these pieces together.

My whole life, people keep telling me to work bigger BIGGER! This is generally good and freeing advice. Unless you’re me. And that’s a very funny thing for a former scenery designer/painter to say. I’m happier working small. And in this case, it made the work go faster and forced me to loosen up and work in the parameters. I did have a bit of a breakdown partway through because I didn’t think I’d be able to finish on time after almost two months of noodling the drawings in my head. But I did. Project-Runway-Make-It-Work style in under 36 hours! So I’m pretty proud of that but it’s not my favorite way to work.

This year’s Narrative Award assignment: “2019 is the 50th anniversary of the Apollo 11 mission’s moon landing. In recognition of this iconic event, the 2019 assignment is to submit a narrative sequence involving a ground-breaking journey, whether historical, personal, or imagined.”

So of course I went historical. In retrospect, I should have used the couple’s (nonexistent here) child as the main character. So when (if) I redo it, he’ll be there. Now, this is actually a true story. It’s not my story. It’s a story one of my friends told me about her family coming to New York over a hundred years ago… 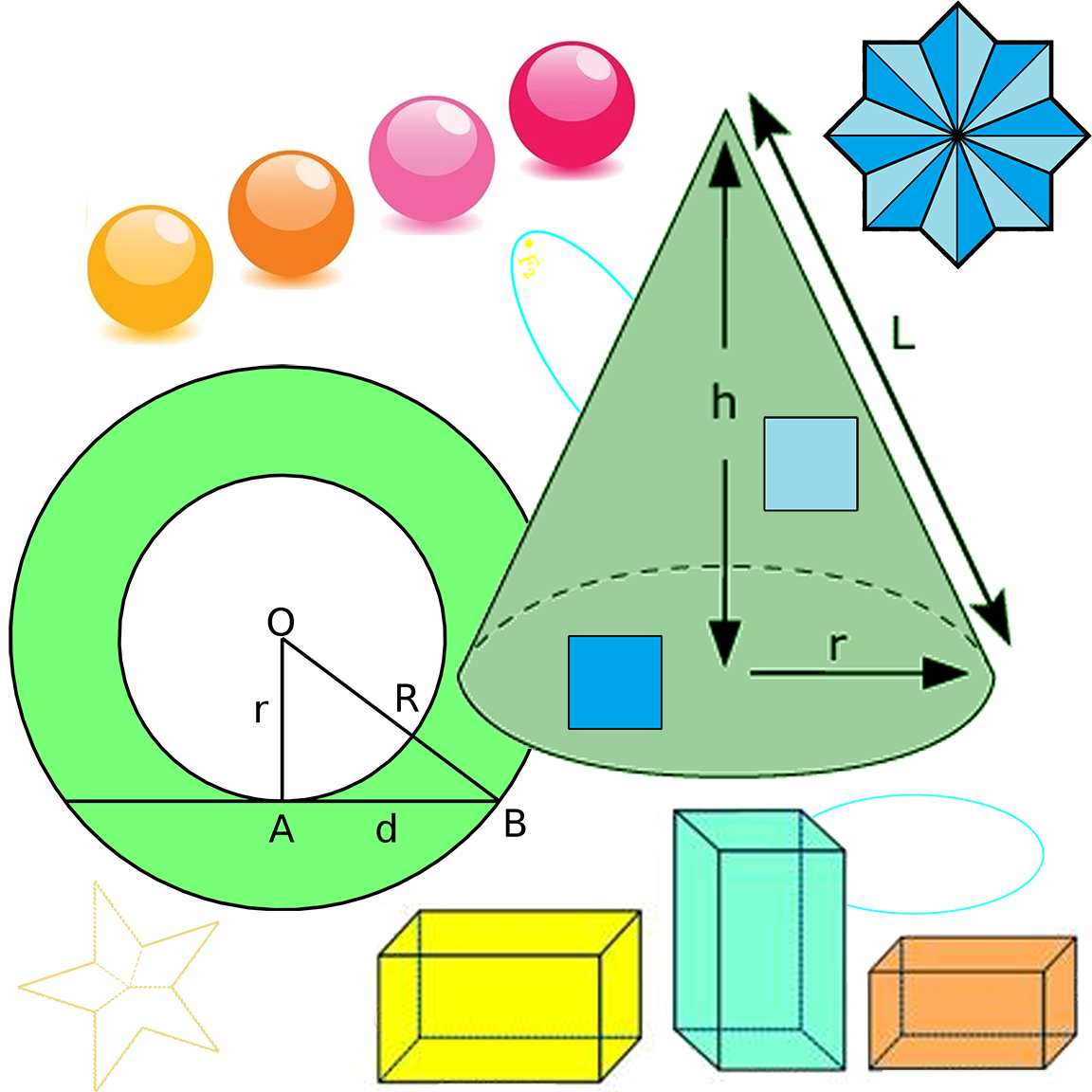 Yes yes I know, I didn’t exactly adhere to the rules but I DID start and finished with Copic Multiliner black and Dr. Ph. Martin white. And then I colored them all in with colored pencils.

The point really was to challenge myself. I decided to work on storytelling by aligning the Inktober prompt words with scenes from Shakespeare’s plays. Limiting the space to 2 x 3 inches helped me to work on improving perspectives, angles, and framing without feeling overwhelmed by a big blank piece of paper. I was also able to gauge how long a full color illustration this size took to finish. A few risks – as in “stop thinking about it and just go for it!” payed off and my confidence level improved. I think I still need to simplify a little, fine-tune my color choices and keep practicing techniques. I also noticed my character’s eyeballs are not consistent from piece to piece but seem to work with the mood of what I was drawing. I did manage 31 drawings in 31 days so I’m feeling pretty pleased with myself.

I also learned a bit about words and Shakespeare. Many of the prompt words were not common vernacular in Shakespeare’s time, only dating back to the early 1800’s. Some words were in use but meant something completely different, and Shakespeare actually invented one of the words!

All of my Inktober illustrations are in the gallery below, but I’m arguing with the technology trying to caption them. For now, I can have a slideshow or I can have captions. So I gave up and just went with slideshow, although hovering over the thumbnails will show you the keywords and quotes. If you’d like to learn more about the individual illustrations, each of my Instagram posts contains the Inktober prompt word, the name of the play and quote that I illustrated and some other microbloggy details on the hashtag, #inktobershakespeare.

As always, all of my pieces are available for purchase as originals, prints, or greeting cards. Just ask me!

Below are all three images from my 2018 SCBWI Narrative Art Award entry. The theme is “Misunderstood Monsters” in honor of the 200th anniversary of Mary Shelley’s Frankenstein.

I had no intention of using my experimental charcoal sketches AS the finals. I’d bought the charcoals as part of my 100 Days Project, experimentally messing around with media and techniques. I thought the charcoals might be a step for loosening up my drawings and ideas before doing the finals in a more likely medium–  colored pencil or inks. I don’t think I’ve actually worked in charcoal in earnest since I graduated high school. But I saw that I was running out of time and personal projects always have the lowest priority.

Also, I’m pretty sure I bent the rules doing panels instead of single illustrations, and my image dimensions are woefully out of the standard. But I think that’s ok because I really did this for myself. I’ve had this story rattling around in my brain since February when it popped out of my head in Susanna Hill’s “Making Picture Book Magic” class.

Inspired by Caliban and Prospero from Shakespeare’s The Tempest but set in the middle of the 20th century, this story is decidedly NOT a picture book. It’s probably better suited, at least, for middle grade. Since it’s about a boy who draws but doesn’t really read, I envision it formatted a little like Brian Selznick’s, The Invention of Hugo Cabret, interspersing images and story text. I hadn’t tried doing panel narrative illustration in, probably, about 20 years, so I wanted to see what I could do in a graphic novel format.

It was definitely a learning experience. I can see many things “wrong,” and things I’d like to neaten up or do better. I kind of feel like I’ve turned in a draft. But deadlines are deadlines. In general, I’m pleased with the results and what I learned from the process and that counts too.

The winner will be announced on November 17th.

Ok I totally wasn’t going to write anything for Susanna Hill’s 3rd Annual Valentiny Writing Contest. I really wasn’t. I’ve been way to busy to think of anything.

So of course while playing “Whack-a-Mole Sunday” –jumping around from cleaning, to kid projects to bedtime– I accidentally came up with an idea. It also helps that I’m currently enrolled in Susanna’s Making Picture Book Magic class, and it would appear that whenever she says “write something,” I can’t help but write… something.

The rules: Write a Valentines story appropriate for children (children here defined as ages 12 and under) maximum 214 words in which someone is hopeful!

Mouse skidded to a stop. “Is something wrong, Toad?”

“Oh. No.” Toad sighed, “Happy Thursday!” He picked up the morning paper and slammed his door.

Mouse scratched her head. “But… it’s Wednesday,” she thought.

Mouse frowned. She still had 223 more Valentines to deliver!

She slid Toad’s under his door. It slid back out again.

Mouse was steamed. She plucked up the Valentine and stomped away.

At suppertime, Toad leaned on the gate watching Mouse shuffle back up the path.

“You’ve ruined my day,” Mouse pouted. “You could have just accepted my Valentine!”

“What’s wrong with taking a special day to appreciate your friends?”

Toad croaked, “Delivering 300 Valentines doesn’t make anyone feel special. I don’t want a card, I want you to be my friend.”

Mouse felt sad. Toad had a point, but she didn’t know what to do.

“Do you want to come in for pizza?” Toad asked.

Relieved, Mouse smiled. She was tired and had forgotten to eat all day.

oooooh! Congratulations to the all the winners, honorable mentions, and EVERYONE who made time to write (and read) some great ValenTINY stories! And THANK YOU to my pocket-muse, Susanna Leonard Hill, for hosting another great competition!

While I wasn’t among the winners this time, My ValenTINY placed an honorable mention for “For Conveying A Great Message”
1 2 3 4