Come In For the Cold 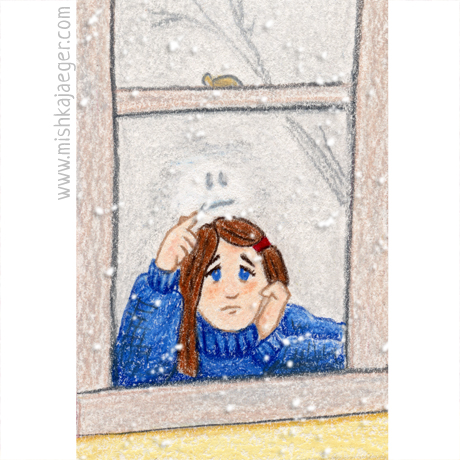 The rules: Write a Valentines story appropriate for children (children here defined as ages 12 and under) maximum 214 words in which someone is grumpy!

Susanna must be my writing muse because so far, the only writings I’ve completed have been for her competitions! Perhaps it’s because I write better with specific assignments and rules so I don’t ramble on and on, writing “like an illustrator”? I’m not sure. But I DO know that these competitions are wonderful learning experiences for me.

I feel like a rock tumbler, polishing and polishing until the final little piece emerges. And no matter how much I really liked my original draft, I see how much better the final piece really is. Working with the word count constraints makes me have to think long and hard about which words I absolutely must keep in order to convey the precise story, what bits were just entertaining chaff, and what I don’t have to write out because it is implied by the other text, and/or would be illustrated.

This story was a painful edit for me because my first draft was 455 words long! Just for fun, and because I like exploring the process, I’ve included two earlier drafts in the drop down’s beneath the final so that if you’re curious, you can see how the rough bits got polished. I will not include my instant messenger log wherein I texted my husband the descending word count as I chiseled away as a matter of score-keeping which he smartly ignored until I hit 214. He then offered a 5 word edit that, I feel, brilliantly completed the story.

A quick side-note on the illustration atop this post:  The topic for the kidlitart chat on February 4th was all about finding your voice as an illustrator, and a challenge ensued involving a quick illustration each day for the month of February (you can read more about that here). I included a quick illustration for this story as part of that challenge, though I have not been drawing every day as I did for the kidlitart28 challenge last year.  By doing up this little illustration, I also discovered that the front side of Strathmore’s “Colored Pencil” pads do not work well with Prismacolor colored pencils. What the what?

Come In For the Cold

“Hot chocolate is for kids who get to play outside in the snow!” Sheena yelled back down the stairs. “I’m not cold and I don’t need warming up!”

“Sorry. I’m missing ALL the fun.” A deep Valentine’s snow had fallen and everybody was sledding on the driveway beneath Sheena’s window. She puffed on the pane and drew a frowny face. “Stupid broken leg.”

Sheena heard the door open and the stomping off of snow in the hall. Her brother came up the stairs.

“Go away!” She snapped without turning around, then shrieked as Joey dumped handfuls of snow over her head.

“Lighten up!” he laughed as Sheena frantically dusted icy flakes from her neck, “I can’t let you miss ALL the fun!”

“What ARE you doing?” Sheena sputtered, reaching for her crutches.

“Since you can’t come out and play, we’ll make a snowman here,” Joey chirped as he emptied a bucket of fluffy snow into the bathtub.

“I love you, too!” he retorted, smiling broadly.

Sheena hobbled to the bathroom shaking icy drops from her hair.

The cold felt wonderful in Sheena’s bare hands.  “Mom,” She called, “I’m earning my chocolate! But first… I need a carrot!”

Doin’ the happy dance AGAIN this morning! The winners are posted and I placed 4th!

Another big THANK YOU to Susanna Leonard Hill for hosting this fantastic Valentine’s competition for the first time this year (I seriously don’t know how she does it!) and for once again encouraging me to write!

Sending out a big thank you to everyone who entered the competition. You all write so wonderfully well! I love reading as many stories as I can, even though I can’t always leave comments.

Now I need a few more hours in the day to get some drafts out of my head!